New York Times ::: Is That a Dagger I See on My iPhone? 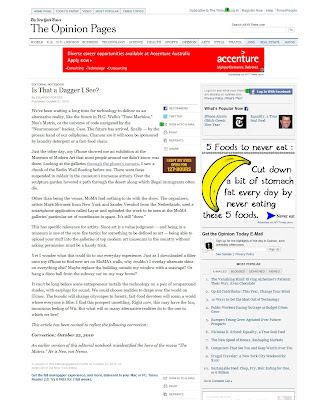 New York Times ::: Is That a Dagger I See on My iPhone? Editorial Notebook
By EDUARDO PORTER
Published: October 21, 2010
We’ve been waiting a long time for technology to deliver us an alternative reality, like the future in H.G. Wells’s “Time Machine,” Neo’s Matrix, or the universe of code navigated by the “Neuromancer” hacker, Case. The future has arrived, finally — by the prosaic hand of our cellphones. Chances are it will soon be sponsored by laundry detergent or a fast-food chain.

Just the other day, my iPhone showed me an exhibition at the Museum of Modern Art that most people around me didn’t know was there. Looking at the galleries through the phone’s camera, I saw a chunk of the Berlin Wall floating before me. There were faces suspended in midair in the museum’s immense atrium. Over the sculpture garden hovered a path through the desert along which illegal immigrants often die.

Other than being the venue, MoMA had nothing to do with the show. The organizers, artists Mark Skwarek from New York and Sander Veenhof from the Netherlands, used a smartphone application called Layar and uploaded the work to be seen at the MoMA galleries’ particular set of coordinates in space. It’s still “there.”

This has specific relevance for artists. Since art is a value judgment — and being in a museum is one of the sure-fire tactics for something to be defined as art — being able to upload your stuff into the galleries of top modern art museums in the country without asking permission must be a handy trick.

Yet I wonder what this could do to our everyday experience. Just as I downloaded a filter onto my iPhone to find new art on MoMA’s walls, why couldn’t I overlay alternate skins on everything else? Maybe replace the building outside my window with a seascape? Or hang a disco ball from the subway car on my way home?

It can’t be long before some entrepreneur installs the technology on a pair of wraparound shades, with earplugs for sound. We could choose realities to drape over the world on iTunes. The bucolic will change cityscapes to forests; fast-food devotees will roam a world where everyone is lithe. I find this prospect unsettling. Right now, this may have the fun, innocuous feeling of Wii. But what will so many alternative realities do to the one in which we live?
Posted by markskwarek at 8:54 PM

Labels: ar, augmented reality, Is That a Dagger I See on My iPhone, Mark Skwarek, New York Times, nytimes